C-Train is the name given by Calgary Transit to its light rail service, in operation since 1981. Currently two major routes are operated on 42.1 km (26 miles) of track, running into the southern, northwestern, and northeastern sections of the city. There are also currently plans to build additional lines running to the west, north and the southeast of the city.

The first line of the C-Train opened on May 25, 1981 following three years of track work. This line, the 'South Line', ran from downtown Calgary south to Anderson Station (see South Line below for details). The other two current sections of line, the Northeast Line (running northeast) and the Northwest Line (running northwest) opened on 27 April 1985 and 7 September 1987 respectively. Since those opening dates, ten new stations have opened up:

The C-Train initially used Siemens-Duewag U2 trains (originally designed for German metros, and used by Edmonton's earlier light rail system), which constituted the entire fleet until mid-July 2001. At that point in time the first cars of the newer Siemens SD-160 began arriving. There are now seventy-two SD-160s and eight-two U2s in service (the eighty-third U2 was retired in a March 2002 accident). 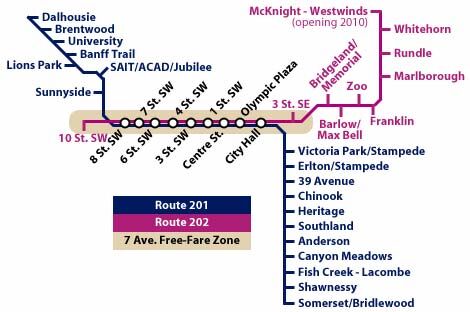 Seven stations on this line opened on May 25, 1981, as the first light rail line to serve the city. From north to south, they are Victoria Park/Stampede (originally Stampede), Erlton/Stampede (originally Erlton), 39th Avenue (originally 42nd Avenue), Chinook, Heritage (also the site of the Haysboro LRT Storage Facility), Southland, and Anderson (also the site of the Anderson LRT Yards). On October 8, 2001, two new stations were added: Canyon Meadows and Fish Creek-Lacombe. On June 27, 2004, two more stations opened: Shawnessy and Somerset-Bridlewood. A twelfth station - Silverado (most likely in the area of 194th Avenue SW) - is planned for the future once the community of Silverado in the south is developed, likely beyond 2020.

Five stations on this line opened on September 7, 1987. From the most central to the most northwesternly, they are Sunnyside, SAIT/ACA&D/Jubilee (the station name in full is "Southern Alberta Institute of Technology/Alberta College of Art and Design/Jubilee Auditorium"), Lions Park, Banff Trail, and University. On August 31, 1990, Brentwood station was opened as a new terminus, and on December 15, 2003, Dalhousie Station was opened. An eighth station - Crowfoot - opened in 2009, as well as a ninth station - Tuscany-Rocky Ridge - in 2014. An intermediate station near Northland Drive is possible in the future as well (between Brentwood and Dalhousie).

This route comprises one line: the Northeast Line. All seven of these stations opened on April 27, 1985; from most central to most northeastern, they are: Bridgeland/Memorial, Zoo, Barlow/Max Bell, Franklin, Marlborough, Rundle, and Whitehorn. An eighth station - McKnight/Westwinds - opened in late 2007, along with a northeastern LRT yard. Two more stations - named Martindale and Saddletowne - opened in 2012.

The plans for this line, which runs west from downtown, have existed since the beginning of construction of the South Line in 1977; it opened in 2012 in the Bow Trail and 17th Avenue SW corridors. Seven stations have been opened; they are named (from east to west): Downtown West-Kerby, Sunalta, Shaganappi Point, Westbrook, 45th Street West, Sirocco, and 69th Street West. It is also possible that the line may eventually continue as far west as 85th Street West once that area is developed.

This line is planned to run from downtown to the new communities of Douglasdale and McKenzie in the southeast. Thirteen stations have been planned, of which up to seven are expected to be built by 2023. From the most central to the most southeasterly, they are: East Village (possible), Inglewood/Ramsay, Highfield/Bonnybrook, Lynnwood, Millican-Ogden, Glenmore/Riverbend, Douglasdale (the last station expected to be built by 2023), Shepard, New Brighton, McKenzie Towne, Auburn Bay, Health Campus (adjacent to a planned southeast hospital - the station likely will share the name of the hospital), and Seton.

Although it is expected to be built beyond 2023, this line (which has an undetermined route) will likely go to serve the Country Hills community and go as far as the planned Stoney Trail beltway. In addition, an airport spur (which could include a connection with a proposed high-speed rail service to Edmonton) is also possible, hence creating two lines running concurrently from 64th Avenue NE through to downtown.

Currently, Calgary Transit operates three-car trains. The three newest stations - Tuscany, Martindale and Saddletowne - have been built to accommodate trains of four cars, and it is planned to expand the original stations to support four cars. The downtown stations and the South Line were upgraded first, ending in 2013; followed by the Northwest Line (so as to be able to run four-car trains on Route 201) in 2014 and the Northeast Line in 2013. By 2023 Calgary Transit also plans to begin replacing some of the original Siemens-Duewag U2s (as of 2004 eighty-two of the original eighty-three are in service, and are nearing twenty-three years of service, and by 2023 will be forty-two years old).

Community content is available under CC-BY-SA unless otherwise noted.
Advertisement